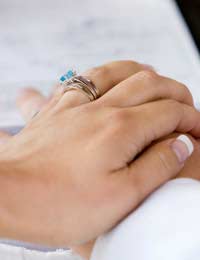 When a parent makes the choice to marry, they must be ready to offer support to their spouse in order to help them to develop and maintain a healthy relationship with the children. Kids naturally need a bit of time to adjust to the changes in their families, but are likely to follow the lead of their natural parents, so forming a united front and providing an example of respectful inclusion is vital.

Children (like the rest of us) are creatures of habit and as such, they may resent some of the inevitable changes that occur when one of their parents remarries, especially if they will be living in, rather than merely visiting, the household with the new stepparent. Changes in the household rules are likely to be the most difficult for them to accept, but the adults in the home need to be obeyed and respected.

Before implementing any changes, the adults should decide together what, if any, adjustments need to be made regarding chores, curfews, television watching limits, schoolwork expectations, friend visits, and others such topics. If it is decided that the rules need to be amended, the couple can then sit down with the children to discuss the newly established household rules. It is important that the guidelines (and disciplinary measures for refusal to comply) are the same for all of the kids in the household to avoid any feelings that some children may be receiving preferential treatment, and it may be wise to make changes gradually to help ease everyone’s adjustment.

It is the rare (non-existent, really) household that doesn’t experience at least the occasional conflict, but some stepparents find that the difficulties may be greater with their step children than with their natural children. It’s not uncommon for step kids to get their feelings hurt more easily than natural children as they may assume that their stepparents do not feel the same depth of love for them that they do for their own, so stepfamilies must make every effort to keep things fair and even – and step parents should take the time to tell their step children how much they are cared for. When conflicts do arise, the natural parent can often help to smooth things over by backing their spouse up and presenting a united front.

While both adults in the house make the rules, it is often left to the natural parent to shoulder the responsibility (and the grief from the children) to see that the rules are obeyed. It’s important for the kids to understand that new rules aren’t merely the result of their step parent’s influence, but have been discussed and agreed upon by both authority figures in the home. Sometimes kids have a tendency to look for a place to assign blame for their distress, and unfortunately, a step parent can be a handy target.

Newly formed families may require some time to adjust to one another, and one of the best ways to encourage loving, lasting bonds is for the parents to make time to participate in fun activities with the children. Sharing special meals, playing games, and going on outings as a family gives everyone time to get to know one another without pressure, which can help to minimise family conflict. As in all family units, positive experiences can help cushion the hard feelings that are bound to crop up every now and then.

What Should My Stepchildren Call Me?
Share Your Story, Join the Discussion or Seek Advice..
@Jim - no matter what your ex throws at you always aim to be the bigger person. She won't be able to get to you then. My ex has tried to do everything to make my life a misery - I just try to rise above it so she can't get to me. It frustrates the hell out of her - but I remain the one with the smiles while her face has a permanent look of sour grapes. I find it quite pleasantly gratifying! Aid.
AB78 - 20-Mar-17 @ 2:50 PM
I feel for any parent that is trying to find happiness after a marriage that did not work out. I am in the position where my ex seems to have the mission to take the smile from my life and uses the children as a weapon. I have started again with a beautiful person that my children love. My ex is determined to destroy that chance. Im lucky my partner is determined that she will fail in that endeavor. I wont rubbish her but it is sad that i am still her lifes work when our 2 children should be.
Jim - 18-Mar-17 @ 1:48 PM
I, very recently decided to have my partners son move in with both me and my partner. We have been together for nearly four years and her son wanted to stay with his much older sister whilst my partner moved in with me. See the thing is, me and my partner are both female, and I think her son was embarrassed that his mother was in a same sex relationship, so wanted to remain in their family home. A few years later, my partner's step daughter (her son's half sister) decided to move in with her boyfriend so, her son had no option but to move in with us. He isolated himself from us at first, said very little, and went to bed each night very early. Me and my partner were worried, although this was never spoken about - call it women's intuition!! But after a few weeks he was coming in to the living room, sitting with us for short spells, and then going to him room. It has taken 5 months for us all to learn how to live with each other, but the most concerning factor is that me and my partner's relationship has changed. We rarely make love, and seem to fight now more than we get on. He is messy, selfish and like most 17 year old boys, that I can handle, but now I feel like the outsider in my own flat. My partner says that I have lost my attraction for her, and don't want her. That couldn't be farther from the truth. Her son is always extorting money from her, and its £20 a go. He says he will give her the money back from his bursary, but she never takes it. I just feel like a fool most of the time. The odd one out! I care about her son, but he is coming between us so much. She just can't get enough for him. His birthday has just passed and he got £400 worth of gift between us, and two days later wanted her to buy the latest play station game and he would give her it back from his bursary. She is now lying to me about giving him money after I comfronted her, I said you are giving your son more than my own personal allowance for the week, and it is so degrading. She doesn't share her money with me. She gives me half the bill money, and keeps the rest. She makes around £600 more than me per month, so I am being treated like her child also, we are not equal partners. Her son is getting from her around what is left of my wage for me for the month, and half the time I spend money on him too. I just feel I'm at my wits end. We argue about her son all the time, he's heart lazy and her keeping him up to date with the latest electronics and fashion isn't making him want to even go to college. He has been there just 4 weeks and has already taking a day of sick. He waited until she went to work that day and then came to me saying he wasn't going in. I told him that he was telling her and that I wasn't and he said he would text her. He went straight back to bed, and that was him to 5pm that evening. She came home from work, and me and her got into a fueled argument because I was apparently playing games with her - what I said t
mo - 1-Oct-13 @ 9:00 PM
Title:
(never shown)
Firstname:
(never shown)
Surname:
(never shown)
Email:
(never shown)
Nickname:
(shown)
Comment:
Validate: