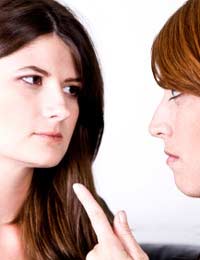 Many stepfamilies have to deal with conflict. The kids may not always get along and finances can be especially tough when parents are contributing to the expenses of two households, but too often, some sources of stepfamily stress are the hard feelings that exist between the children’s mother and their stepmother, frequently over jealousy, petty disagreements, or unresolved emotions from a romantic relationship gone sour.

Understanding the Position of the Children’s Natural Mother

When a relationship ends, there are often unresolved issues, leaving both partners with some mixed emotions and uneasiness. When one moves on and enters into a new relationship, the other partner may feel hurt, angry, or even frightened, and may have a hard time understanding why the news is having such a strong impact on them.

While watching an ex happily involved with a new woman can be difficult, it can be next to impossible to feign acceptance when that same woman begins to develop relationships with the couple’s children. Whether or not it seems reasonable, it can be very hard for mothers to see their children being “mothered” by another, yet when their fathers remarry, a certain amount of affection is likely to develop between the children and their stepmum.

Understanding the Position of the Children’s Stepmother

Falling in love and getting married are happy events, and when a woman marries a man who has children, it is best if she is able to develop a warm and loving relationship with her stepchildren. Of course, being new to the family isn’t always easy and it may take a while for the children to accept their stepmum and treat her as anything but an unwelcome intruder.

Winning the approval of the children can be a difficult enough task, but when their mother allows them to see that she is uneasy about the burgeoning relationship, the kids may be inclined to further withhold their affection and put additional distance between themselves and their stepmother. Sadly, this situation is not only hurtful for the stepmother, but only makes life more difficult for the children, who may feel torn between their loyalties to each of their parents.

It’s easy enough to say that all parents need to put their children’s needs before their own and not allow their personal reservations colour their judgment. In reality, though, parents typically have a great deal of emotion invested in family issues and often find it quite difficult to separate their feelings from their behaviours. In the name of peace and family harmony, however, they must try.

In families where Mum and Stepmum seem to bring out the worst in one another, it can be helpful for the children’s father to intervene, asking each to make the effort to behave respectfully, if for no other reason than to benefit the kids. Keeping the lines of communication open and offering a willingness to give one another a chance is a gift to the children and when both women agree to refrain from being petty or childish, the hard feelings on both sides are likely to fade, making life easier for the whole family.

Sheltering the Children from Adult Disagreements

Even when parents and stepparents have valid reasons for disliking one another, they need to keep their feelings under control so as not to cause the children any unnecessary hardship. Kids have the right to love both of their parents, and usually do so unquestioningly unless they’ve been made to feel that they shouldn’t.

Unless maintaining a relationship with one of their parents or stepparents puts the children at risk, the remainder of the family needs to offer their support to see that the kids can have close, loving relationships with everyone. Mum and Stepmum may never like each other, but in all likelihood, the children love them both.

Encourage your Step Child's Relationship with their Mother

Knowing When to Say Something and When Not to

The Benefits of Being a Step Mother

Trying to Impress your Step Child
Share Your Story, Join the Discussion or Seek Advice..
My son’s dad and I never married and live in two different continents. I am traveling to his continent with a child he last saw when the child was 18 months old, now he is almost 11. I have no feelings for him but my son wants to meet his father and siblings. Is it wrong for me to want to meet my son’s step mom before I leave him with them for safe keeping. Thank
Spice - 18-Jun-19 @ 6:13 PM
Title:
(never shown)
Firstname:
(never shown)
Surname:
(never shown)
Email:
(never shown)
Nickname:
(shown)
Comment:
Validate: