Home > Case Studies > What It's Like to Be a Step Mum: Case Study

What It's Like to Be a Step Mum: Case Study 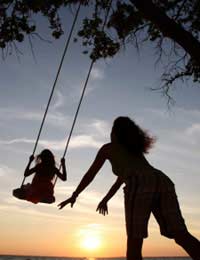 Meeting the man of your dreams and then developing a relationship with him-and all your children-may not be exactly how things were first time round! Chances are that the first time you fell in love you were much younger, didn’t have any children and life was very different.

However, just because you now have responsibilities and experiences from your past that you are bringing to a new relationship, this doesn’t mean that becoming a step mum will be difficult.

Denise became a step Mum to Dave’s twin girls when they made the decision to move in together. Denise had never had children of her own and so this was a big change for her.

She said: “When I met Dave I knew he had kids - he was very upfront about it all and I actually think that he thought it would put me off! I work with children and love them so I was really pleased that he was a Dad and looked forward to meeting the girls.”

All in Good Time

“I was really keen to get to know Dave’s girls, especially because I knew his wife had died and thought that they would really need a new Mum - how wrong I was! The fact is that Dave and the girls had become a very tight little unit and were actually managing really well on their own, I wasn’t needed to rescue them or take care of them and now I am glad that Dave waited so long before I was introduced to them.”

Wait For Them to Come to You

“Friends who had been through similar situations had been giving me advice and saying that I shouldn’t rush in with the girls, but wait for them to come to me. I did and it really paid off. The first time I met them was at a local village fete and we just spent the afternoon playing silly games and eating ice cream. It was very relaxed and perfect because there were a lot of distractions and no pressure on them to spend all the time with me.”

“I think I was so desperate to NOT be seen as a wicked step mother that I went overboard initially and really started to spoil the girls with treats and presents. I over indulged them and Dave eventually told me to calm down because the girls were only associating me with treats and nothing else!

“By the time we all moved in together, into Dave’s house, the girls were really comfortable with me and we had got to know each other really well. The change for me was much bigger than it was for them. I left my single life behind and entered a world of routine, bedtimes and bath times, homework, Barbie dolls and later loud music and boyfriends! I have loved every minute of being a step mum.

"When I met Dave the girls were eight and now they are 16 and really grown up! I know that I will never replace their Mum and we still talk about her and look at pictures of her, but I do know that we are a happy family and even though I don’t have any children of my own and now never will, I don’t think I have fared too badly as a Step Mum!”